SWEDISH ROADS AS RUNWAYS—U.S. AND U.K. TOO?

THE TOP SECRET part of the photo shoot was Saab’s EV-1 concept car—not the Viggen jet fighter. And this was why we were on the runway of a Swedish Air Force base. On the other hand, as shown in the photo below, many roads in Sweden can be used by military aircraft. What’s more, maybe I’ve driven on roads in England and the U.S. configured with aircraft use in mind. Or maybe not.

This road-going Saab is a JAS 39 Gripen, the company’s “Smart Fighter.” The image from x-plane-org has not been doctored.

The Swedes aren’t unique in this concept of roads as runways. In the closing portions of World War II, the Nazis used Autobahnen for aircraft deployment. Subsequently, during the Cold War, highway strips were developed on both sides of the Iron Curtain. Other European versions exist in Finland, Switzerland, Poland and the Czech Republic. North Korea, Singapore and Taiwan have them too. 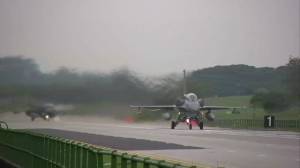 Exercise Torrent 2008, the Republic of Singapore.

Perhaps you’re heard as well that the U.S. Interstate system was designed with one mile out of every five capable of being used for B-52 takeoff or landing. A good story, but according to the U.S. Federal Highway Administration, only a garbled version of the truth.

A U.S. Air Force C-130 Hercules sets down on the A29 Autobahn near Ahlhorn, Germany.

Federal Highway Administration information liaison specialist Richard F. Weingroff gives details in “One Mile in Five: Debunking the Myth.” In fact, evolving from the Defense Highway Act of 1941, a flight strip program was operated by the FHA’s predecessor and the U.S. Army Air Force.

As described in 1943, each flight strip was built in the direction of prevailing wind, with a shelter equipped with a telephone. These flight strips were designed for easy access to highways (not part of them) and varied in size. The smallest were 150-ft. wide and 4000 ft. long; length increased by 500 ft. for every 1000 ft. in elevation. Large strips were capable of handling heavy bombers of the era, including B-17 Flying Fortresses and B-24 Liberators.

The U.S. Congress considered including a flight strip program in the Federal-Aid Highway Act of 1944, but didn’t follow through. There’s a myth that the one-straight-mile-in-five rule was part of the Federal-Aid Highway Act of 1956, the legislation creating what evolved into the 42,800-mile Eisenhower Interstate Highway System. However, President Eisenhower didn’t propose any such rule; nor did Congress include it in the 1956 Act.

It’s likely this image from the Federal Highway Administration website is purposely doctored.

Though my U.S. Interstate travels may not have overlapped with B-52 runways, I have first-hand proof of a near-miss just off the M4 in Great Britain.

Grand Prix driver Innes Ireland lived on Wickham Heath, near Hungerford, not far from the A338 exit of the M4 about 60 miles west of London. Nearby is Welford, home of RAF Welford, then and now, one of the largest U.S. Air Force compounds of heavy munitions in Europe.

Eastbound on the M4 a few miles east of the A338 exit, there’s a sign that reads “Works Unit Only.” This non-exit, of sorts, leads directly to RAF Welford. The sign’s only giveaway to this destination is its red border, Brit signage for a “defence” establishment.

Innes said local lore had it this is how nuclear weapons made their way into and out of the compound—and maybe how B-52s were to make their way to and from the M4.

Full disclosure: This Google Image may have been doctored.

Innes and I cajoled ourselves into driving down the mysterious road once. But not very far. ds