WHERE ARE SELF-DRIVING CARS HEADED?

IF SELF-DRIVING CARS are to be common on U.S. streets by 2020, many crucial decisions are still to be made. Even the basic concept isn’t clear: Google’s goal, for example, is full autonomy, even to omitting the steering wheel and other controls from the cabin. In a single step, safe personal mobility could be offered to inexperienced youth, the elderly or the physically challenged. 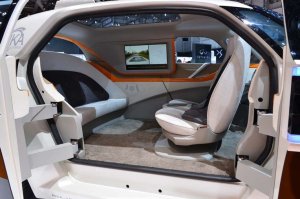 Google car needs no (and has no) driver controls. Image from engineerpal.com.

In contrast to Google, Toyota sees various levels of vehicle autonomy not as an end, but as a means of enhancing driver performance and safety. The company is investing an initial $1 billion in its own Toyota Research Institute, TRI focusing on robotics and artificial intelligence.

Those less confident of self-driving vehicles fear a flurry of lawsuits. Rather than the classic acrimony of “he said/she said,” it would be “the driver did/it did.” Others have pondered the ethics of human versus machine, a typical albeit complex example described in The Trolley Problem and related philosophical issues. Briefly, which life is to be saved: the autonomous car’s occupants? Or the pedestrian?

Gill Pratt, head of Toyota’s research effort, offers an optimistic view on such philosophical quandaries of human versus machine. “Human beings don’t solve the trolley problem well,” he says. Machines may make a bad decision from time to time, but overall they would be significantly better—and safer—than humans.

I chatted with specialists about this at the 2016 SAE Hybrid and Electric Vehicle Technologies Symposium. One topic was society’s readiness for the practical aspects of autonomous vehicle operation.

We already have things like smart cruise control and lane-departure alerts, apparently without causing chaos. What’s helpful is a unanimity of government, industry and users all buying into the concept. Europe, one colleague told me, has been more amenable (think less litigious) than the U.S. in this regard.

The Isle of Man Tourist Trophy may get competition from tourists of an entirely different sort. Image from Tony Goldsmith/tgfphotos.com.

The Isle of Man, renowned for its outrageously exciting Tourist Trophy motorcycle racing, has been proposed as a test site for self-driving cars. This may sound like exceedingly odd bedfellows, but there’s logic in the proposal of Phil Gawne, the island’s transportation minister.

The Isle of Man is in the Irish Sea between Ireland and Britain, with a land mass about the size of Chicago. What’s more, it’s a self-governing Crown Dependency of Great Britain. This self-governing status translates into less bureaucratic hassle in implementing such an experiment. Any necessary changes of the island’s motor vehicle laws could be made by early summer. Gawne has already promoted the idea among companies developing autonomous vehicles.

Tourism is important to the Isle of Man economy, and the appeal of innovative transportation is evident (especially to tourists traveling on “the wrong side” of the road).

This isn’t the first time an island environment has been proposed for innovative personal mobility. In 1992 through 1996, the German island of Rügen in the Baltic was used for a trial of fledgling battery electric vehicles—with less than success.

Rügen is Germany’s largest island, 32 miles north to south, 27 miles east to west. (By comparison, Isle of Man is 32 miles by 14 miles, respectively.) The island is renowned for its sandy beaches, lagoons and open bays. Rügen’s town of Altefähr is linked to the mainland town of Stralsund by bridge.

Back during its BEV experiment in the 1990s, only a two-lane causeway existed. Sixty vehicles took part in the experiment, 37 cars, 20 vans and 3 minibuses, all internal-combustion vehicles converted to BEV operation. Today, not much is said about Rügen. It gets only a brief paragraph in Electromobility in Germany: Vision 2020 and Beyond, published by Germany Trade & Invest, issue 2015/2016.

From the report: “Although ultimately ill-fated (due to dependence on a conventional layout converted for electric propulsion and the low efficiency rates of electric energy storage units at the time), the so-called ‘Rügen Trial’ served as a statement of intent to develop electric vehicles fit for purpose.”

I wonder if autonomous vehicles are any more ready for the Isle of Man? ds

2 comments on “WHERE ARE SELF-DRIVING CARS HEADED?”