E2F2 AND OTHER COMPUTERIZED FUN

The Petroleum Endgame version, as it appeared in R&T, August 2008.

SK is the car’s skidpad value, times 100. SL is its slalom speed, QS is quarter-mile speed, both in mph. FE is the arithmetic average of the car’s EPA City and Highway values (note: not the EPA’s weighted Combined), times 4. FR is the car’s test-route mpg, times 2. These values are all in the numerator because, in each case, bigger is better.

Performance numbers are fudged so each lies more or less between 10 and 100, thus giving them somewhat comparable weighting. Originally P was the square root of price (with citation about the love of money being the root of all evil). What with car prices increasing (and hand calculators getting more versatile), P decreased from square root (the 0.5 power) to 0.4, thus flattening out the influence of price a tad.

Back before the commonality of Microsoft Excel, assessing a bunch of cars with E2F2 took a month of Sundays. In fact, even with Excel it’s still a tedious process of entering data. As used to be said in math texts, this is left as an exercise for the reader.  Yeah.

Another early attempt at computerized automotive assessment also arose, relatively speaking, in ancient times. As I wrote back in October 1986, Subjective Ratings in R&T Comparison Tests always combined “things like ashtray access, heel-and-toeability and whether that little trim strip on the dash keeps falling off during the car’s three weeks with us.” To some readers, some of these things were paramount; to other readers, they didn’t affect a car’s goodness by one whit. 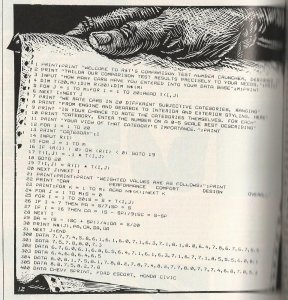 I ginned up a computer program in BASIC (remember BASIC?) that let the reader weight each category to personal needs. It took about half a page of BASIC instructions, and I don’t recall anyone commending me for my effort.

9 comments on “E2F2 AND OTHER COMPUTERIZED FUN”

This entry was posted on March 18, 2015 by simanaitissays in Classic Bits, Driving it Today and tagged E2F2, Engineering Editor's Fun Factor, Leo Bestgen.