THE SANDS OF TIME—AND OF CARGO

EUROPE AND the U.S. have different standards for measuring cargo capacity of cars and trucks. Ram (what old-timers think of as Dodge Truck) recently corrected overly optimistic claims in the U.S. introduction of its Fiat Ducato-based ProMaster. Then Mercedes-Benz dialed back on its cargo data as well.

The reason for these changes in specifications got me thinking of a hare-brained scheme of mine. 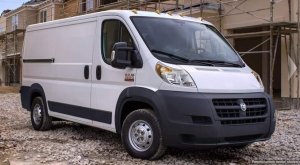 The Ram ProMaster is jointly developed by Ram Truck and Fiat Professional. It’s being built at Chrysler’s Saltillo, Mexico, facility. The ProMaster’s basic platform is Fiat Ducato, a light commercial front-wheel-drive vehicle. The Ducato has been in production since 1981 in three generations and a bewildering array of nameplates.

Early on, there was even an Alfa Romeo variant, the AR6, sold only in Italy as a van and pickup truck. About two-thirds of motorhome conversions in Europe are Ducato-based.

By European measure, the latest Ducato has 530 cu. ft. of cargo capacity, and this is what Ram initially advertised for its ProMaster. However, U.S. standards are more conservative, and when applied to the ProMaster reduce its capacity to 463 cu. ft.

U.S. volumes are calculated as if boxes of various sizes are accommodated. The European standard is akin to filling the volume with sand, thus including nooks, crannies and places omitted in U.S. figuring.

Following suit, Mercedes-Benz refigured the capacity of its European-designed Sprinter (also sold by Freightliner in the U.S. with the same moniker). Sprinter capacity went down from 547 cu. ft. to 530, still the biggest capacity among commercial vans sold in the U.S. What’s more, Mercedes is bringing in a high-roof model later this year that ups capacity to 586 cu. ft.

That’s a lot of boxes—or sand.

Which got me thinking of years ago and one of my more hare-brained schemes while Engineering Editor at R&T. We all knew that handling characteristics of a car depended in part on how many passengers or cargo was aboard. But how to quantify this?

A most telling indicator of a vehicle’s transient handling was the slalom test, weaving between six cones placed 100 ft. apart.

As an aside, race driver/tuner Dick Guldstrand once let me run what we envisioned would be a slalom-optimized Chevrolet Camaro, its suspension jacked to account for driver weight. The point was to make a car equally adept through the slalom’s left gates as through its right ones. The concept failed, not in theory but in practice: A slalom driver learns to account for the weight differential and to drive the gates accordingly.

But back to passengers and cargo. Why not get a baseline slalom time for a car, then redo it with passengers aboard?

I tried this once, but volunteers mysteriously became scarce.

Aha, I thought, why not eliminate human frailties (the wimps…) and use simulated passengers?

Kitty litter was available in 20- and 40-lb sacks, and I could strap these in for the slalom runs.

This turned out to be a mistake because even those wimps could buckle their own belts. And, what’s worse, wimps were less prone to puncture.

Which is why I was reminded of this difference in U.S. and European measurements of cargo capacity.

3 comments on “THE SANDS OF TIME—AND OF CARGO”

This entry was posted on May 22, 2014 by simanaitissays in Driving it Today and tagged European vs U.S. cargo measurements, Mercedes-Benz Sprinter, Ram ProMaster nee Fiat Ducato.