FORTUNES INTERTWINED for an Italian-born Alsatian, a Wisconsin-born Californian and a Cleveland kid who changed his name in tribute to a famous race driver. The personages, respectively, are Ettore Bugatti, Harry Miller and Leon Duray.

An essential element of this tale is the 1928 Miller 91 Indy Special currently on display at The Mullin Automotive Museum in Oxnard, California. See http://wp.me/p2ETap-1Zb for details of this exhibition. 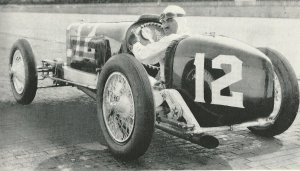 Cleveland-born George Stewart began his driving career in “scripted” car races at fairgrounds. To enhance the show, he adopted the moniker Leon Duray; this, in tribute to Arthur Duray, a driver of the era who had already raced in Europe and placed second at the 1914 Indianapolis 500 (only its fourth running). Stewart’s legal name change followed an incident in New Orleans where French-speaking dignitaries discovered the ruse.

Harry Arminius Miller (1875 – 1943) with an engine similar to that powering the Duray Miller 91 Indy Special.

In 1915, Harry Miller and his shop foreman Fred Offenhauser improved upon the best elements of an already successful 1913 Peugeot racing engine. In particular, the Miller 181-cu.-in. straight-eight had double overhead camshafts and other features that were to recur all the way to the perennially potent Offenhauser inline-four. 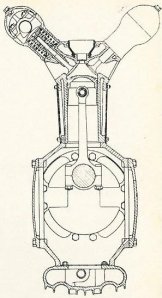 The Miller 91 straight-eight had hemispherical combustion chambers and a barrel-shape dry-sump crankcase.

Miller tried supercharging the 121 with devices of centrifugal type. All Miller 91s used these centrifugal blowers to produce 250+ hp at more than 8000 rpm, amazingly greater than 2.7 hp/cu. in.

Miller 91s took the first four places of the 1926 Indy 500. In both front-wheel- and rear-wheel-drive configurations, they came to dominate racing in America until the expiration of the 91-cu.-in. formula in 1929. 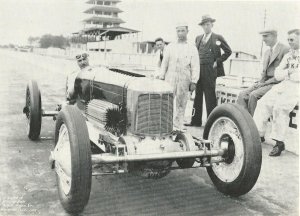 Leon Duray in his Miller 91 at the 1928 Indy. The supercharger intercooler projecting on the driver’s right was of Duray’s own design.

In 1929, the Packard Cable Company sponsored a trio of Miller 91s, two front-drive versions driven by Duray and Ralph Hepburn and a rear-drive counterpart for Tony Gulotta. Duray took the front-drive cars on a European tour, where he set records at France’s Montlhéry circuit outside Paris, then ran at the Monza Grand Prix in Italy.

Duray broke the Monza lap record—and then both cars. The race went to Achille Varzi and his Alfa Romeo, but Ettore Bugatti was sufficiently impressed by the Millers to offer Duray a deal: swap them for a trio of Type 43 Bugattis.

Here, the story gets a bit murky, clouded in part by Bugatti chassis numbers and an entirely different Leon Duray living in Paris at the time. See http://goo.gl/wX0B21 for details.

One thing is certain: Bugatti got Duray’s Miller 91s. Proof is evident in his double overhead camshaft designs beginning with the Type 50. It’s easy to recognize the dohc artistry of Harry Miller. ds