HERE’S A car that ruled early NASCAR the way Ferrari dominated F1 during the Schumacher era. A car decades ahead of its time, to the extent that sales were hampered. One that provided Paul Newman with a movie role. One that an ex-Editor of Road &Track runs to this day.

Also, if you seek such a car for your own garage, look no further than the upcoming Gooding & Company Auction at Amelia Island, Florida, March 7.

Gooding & Company is offering this 1952 Hudson Hornet Four-Door Sedan at its March 7, 2014, auction at Amelia Island, Florida. Originally sold in Bozeman, Montana, the car has less than 58,000 miles on the odometer. Factory-installed fitments include an AM radio, heater and tissue dispenser.

This was back when stock cars were stock and racing at Daytona Beach meant, indeed, racing on the beach.

The Hornet’s inline-six, atop which resides its Twin H-Power intake manifold and dual carburetion. Image from Gooding & Company.

Another Hudson advantage was its low center of gravity traceable to the car’s “step-down” design, its dropped floor pan integrated with the car’s frame members. (See http://wp.me/p2ETap-1Fg for other earlier automotive unibodies).

The unibody configuration made styling changes more expensive and complex than with a traditional body-on-frame design. Alas, the 1950s were evolving into a period of automotive exuberance, and Hudson’s retention of styling for consecutive years hurt its sales—this, despite its stock car racing dominance.

The company was forced into a costly redesign in 1954; lackluster sales resulted in a merger with Nash-Kelvinator a year later. The Hudson nameplate disappeared altogether in 1957. Nonetheless, the image of the step-down Hudson Hornet did more than survive, it prospered.

Doc Hudson was voiced by actor/racer Paul Newman in the 2006 movie, Cars. This promotional image is by Pixar Animation Studios.

The 2006 Disney Pixar animated flick Cars gave the Hudson Hornet a star role as Doc Hudson, a retired Piston Cup champion. Doc’s voice was provided by none other than actor/race car driver Paul Newman in one of his last movie roles. (His voice can be heard in Cars 2006, Dale 2007 and The Meerkats 2008.)

Ron Wakefield, Editor of R&T in the early to mid 1970s, has owned a 1951 Hudson Hornet Four-Door Sedan for 22 years. His enthusiasm for the marque arose from his family owning a Hudson dealership in Mineola, Texas. 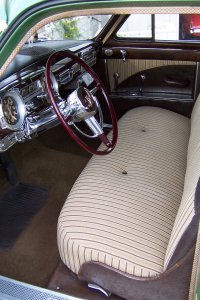 A recent video from one of Japan’s skyline toll roads shows a Hudson Hornet practicing the modern sport of drifting. See http://goo.gl/G0gxT4. Ron says the exhaust note in the video surely suggests the 7X high-performance package.

I suspect the sands of Daytona Beach in the 1950s would have offered less tire wear. ds