“PORSCHE BY Design: Seducing Speed” is taking place right now, until January 20, 2014, at the North Carolina Museum of Art in Raleigh, North Carolina. See http://goo.gl/1oYXkw for a glimpse of this exhibition curated by automotive authority Ken Gross and the museum’s Barbara Wiedemann.

The exhibit’s catalog, hardbound large format at 12 1/4 x 10 1/2 in., is available at the museum or online for $50. It is a bibliophile’s delight as well as an excellent resource on Porsches written by highly regarded specialists. Fourteen articles are by the likes of Karl Ludvigsen, Denise McCluggage, Pete Lyons and Derek Bell.

Historic photos are part of the book’s attraction. Here, the exhibit’s Type 908K Prototype heads the pack at Spa-Francorchamps in May 1968. This and other images from Porsche by Design.

The museum’s exhibit consists of 22 cars shared by owners as well as Porsche AG. Road, race and concept cars are represented, among them the Type 804 Grand Prix car, Type 908K sports racer and the Panamera Concept car. 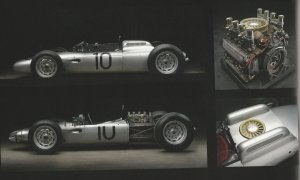 The exhibit’s Type 804, one of only three extant, was driven to victory by Dan Gurney in the 1962 French Grand Prix. This was the factory team’s first and only win in F1 (not to disparage its highly successful engine-supplier role, 1983-1987, 1991).

Janis Joplin sang, “Oh, Lord, won’t you buy me a Mercedes-Benz? My friends all drive Porsches, I must make amends.” Truth is, she drove a Porsche too.

A friend and group roadie, Dave Richards, was given the job of spiffing up Janis’s 356C Cabriolet. The result is a psychedelic statement of the era. The car, still owned by the Joplin family, ordinarily resides in Cleveland’s Rock and Roll Hall of Fame. 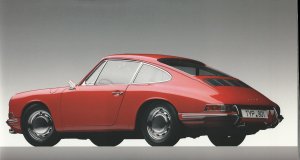 The name 901, Porsche’s internal designation for its 1963 replacement of the 356 sports car, conflicted with French carmaker Peugeot’s claiming to own the X0X moniker. Porsche’s response: the 911. See www.wp.me/p2ETap-1wU for this website’s 911 celebration at its 50th anniversary.

A vast continent separates me from Raleigh, North Carolina. But this artful catalog and its excellent commentary are almost as good as being there. Almost. ds

This entry was posted on October 24, 2013 by simanaitissays in Classic Bits, I Usta be an Editor Y'Know and tagged North Carolina Museum of Art, Porsche by Design: Seducing Speed.