COMPOSER AARON Copland had a profound effect on American culture—and vice versa. Yesterday I shared mini reviews of some of my favorite Copland music (www.wp.me/p2ETap-1wz). Today, it’s a book review.

This book evolved from an exhibit curated by Gail Levin at The Heckscher Museum of Art, in Huntington, N.Y. Its photographs, paintings and other works of art parallel Copland’s formative years, studies abroad with the Parisian Avant-Garde, exploration of folk idioms and “imposed simplicity.”

Other chapters discuss Copland’s wartime works (including his stirring Fanfare for the Common Man, later incorporated into his Third Symphony), music for film (Our Town, one of my favorites), and post-war years and beyond (in which Copland probed limits of 20th Century musical structures). 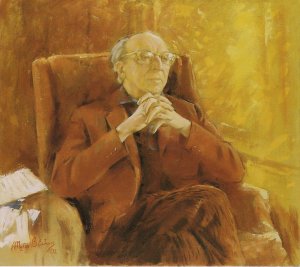 Aaron Copland, by Marcos Blahove, oil on canvas, 1972. This and the following images from Aaron Copland’s America.

This cultural perspective deals only lightly with Copland’s personal life. His homosexuality is mentioned only peripherally. There is a brief recounting of Copland getting caught up in the McCarthy Red Scare of the 1950s; this, attributed to his initial attraction to socialist causes of the 1930s.

In retrospect, it speaks poorly of the era that Copland’s Lincoln Portrait, written in 1942 and now a standard concert piece, was prohibited from the concert accompanying Eisenhower’s 1953 inauguration.

Levin and Tick quote Copland on another of his popular works: “When [Mexican composer Carlos] Chavez took me to an unusual night spot called El Salon Mexico, the atmosphere of this dance hall impressed me, and I came away with the germ of a musical idea.”

Ruth Keahey’s watercolor caricature celebrates the idea with none other than the composer at the piano, a cat stalking a mouse across its lid.

Though originally composed in 1936 for orchestra, El Salon Mexico got solo piano and two-piano arrangements in 1939 by a young Leonard Bernstein. Copland befriended the 21-year-old Harvard graduate sans job and paid him $25 for the work. 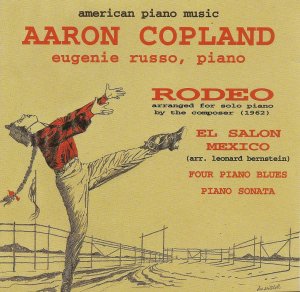 Levin and Tick write, “Throughout his long, illustrious career, Copland rejected the stereotype of the artist as a ‘high priest of art,’ consistently reaffirming the social purpose and cultural relevance of the American composer of classical music.”

Walker Evens’ photographs commissioned by the U.S. Farm Security Administration are evocative of this social purpose and cultural relevance. I think of Lucille Burroughs as spiritual kin of Beth, Laurie’s younger sister in Copland’s opera, The Tender Land. ds

3 comments on “COPLAND AND CULTURE”