HISTORY HAS been known to repeat itself in a disconcertingly short interval. Two British aircraft, the Bristol Brabazon and Saunders-Roe Princess, had similarly ambitious plans—and were both failures, albeit brilliant ones earning places in aviation history.

As noted in the Brabazon’s tale (www.wp.me/p2ETap-1vJ), passenger aircraft in the 1930s grew larger and more luxurious. In particular, this was the golden age of flying boats, long-range aircraft capable of using any suitable expanse of smooth water; Southhampton, the Nile at Cairo, Brisbane Harbour, the destinations were many. 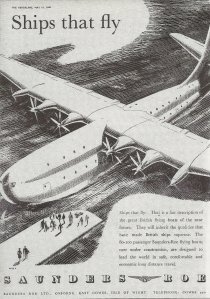 This advertisement in The Aeroplane, May 14, 1948, was a vision of things to come. This and other images from Bob Wealthy’s book.

Planning for the Saunders-Roe SR45 Flying Boat began in 1943; a contract for building three, the first later named the Princess, came in 1946. Construction commenced in 1948 at West Cowes, near Southampton, 95 miles southwest of London.

With a wingspan of 219.5 ft., the Princess was the largest all-metal flying boat ever constructed. This “all-metal” caveat acknowledges the much larger (a wingspan of 320 ft. 11 in.) Hughes H-4 “Spruce Goose” (see www.wp.me/p2ETap-1nt). The wingspan of the Princess included retractable wingtip floats.

The Princess was powered by 10 Bristol Proteus turboprop engines. Eight of these drove four pairs of counter-rotating propellers; the outer two drove single props. Each of these hollow steel propellers, besting the Brabazon’s by 6.0 in., had a diameter of 16.5-ft.

The fuselage contained two decks. Fifty-eight Tourist Class passengers were to have four-across seating in the upper deck and six-across below (“below stairs”?). In fact, though, these tourists even got their own Lounge Bar.

The Princess was to have accommodations for both Tourist and First Class.

As many as 33 First Class passengers had considerably more luxury in their separate portion of the aircraft. Their upper deck had mixed settings of four- and three-across seating. The First Class lower deck contained seven two-berth sleeping cabins and a Lounge Bar that dwarfed the one in Tourist.

As with its Brabazon counterpart, the size of the Princess demanded special techniques of manufacture. Fuselage, wings and tail sections were built in adjacent hangars.

Final assembly was an outdoor activity.

Like the Brabazon, the Princess had development woes galore. Everything from the Proteus engines to air conditioning had problems, redesigns and delays.

Princess G-ALUN had her maiden flight on August 22, 1952, from  the Solent in the West of England. She made a flyby at the Farnborough Air Show that year. Then came handling assessment and flight testing at the Marine Aircraft Evaluations Establishment at Felixstowe. 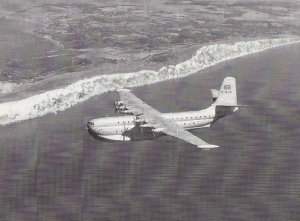 The Princess cruises the English coast.

Ironically, British Overseas Airways Corporation had already decided in 1951 that it had no need for the Princess. Maybe the Royal Air Force had a place for her?

Princess G-ALUN made a total of 46 test flights, perhaps 100 hours flying time. She appeared at Farnborough in 1953, but to no avail. 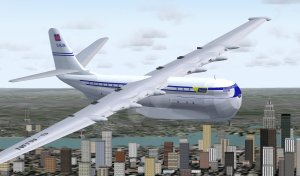 My Princess buzzes Microsoft Flight Simulator’s midtown before setting down in the Hudson River.

Why did the Princess fail?

It seemed logical in the immediate post-World War II era that flying boat travel would thrive. Ironically, though, concrete runways were available around the world because of the war effort. No longer necessary were the aerodynamic compromises of broad-beamed flying boat designs.

Also, like the Bristol Brabazon barely three years before, the Princess suffered from being overweight and having a lack of power. Her pesky Proteus turbines were also in the Brabazon Mk. II at the time of its 1953 cancellation.

Last, and most telling, again echoing the Brabazon’s fate, airline bean counters recognized more profit potential in other aircraft. (That one of these was the engineering-faulted De Havilland Comet jet liner is a tale for another day.)

By 1954, Princess G-ALUN and her two siblings still under construction were put into storage. Several options were explored. Corrosion defeated the cocooning. And eventually, in 1967, the trio were towed to Southampton and broken up for—glorious—scrap.

The Princess never challenged ocean liners in transatlantic service. And, more’s the pity, ocean liners were to give way to speedy and efficient—and cramped—aluminum tubes. ds

This entry was posted on September 10, 2013 by simanaitissays in Vintage Aero and tagged Microsoft Flight Simulator, Saunders-Roe SR45 Princess.