FRENCH AVIATOR Didier Masson competed in the Dominguez Air Meet, held January 10 to 20, 1910, near Los Angeles and the first international flying competition in the U.S. What with an ongoing Wright-Curtiss squabble (see www.wp.me/p2ETap-zA), the Dominguez meet was not without its own adventures. However, Masson went on to achieve aviation history in yet another way.

During 1913-1915, the number of mercenary pilots active in Mexico likely exceeded those flying for the fledgling U.S. Army Signal Corps Aeronautical Division. Didier Masson was one of these mercenaries.

Colonel Alvaro Obregon of the Sonoran Revolutionists could command the very best in his struggle against the Mexican Federal Government.

“Who was that French aviator at the 1910 Dominguez Air Meet?” he asked, “the one who flew his ‘Pegasus’ in Arizona.”

“Yes, that’s the one. Go hire him, give him $5000 to buy an aeroplane and tell him I want those Federales bombed from the air as soon as possible.”

Before long, Didier Masson arrived in Tucson, Arizona, with a crated Martin pusher aeroplane, his first month’s pay of $300 and high hopes.

“I’ll get $50 for each reconnaissance flight,” he said, “and $250 more for each bombing expedition.”

Wouldn’t this be in direct countervention of the U.S. arms embargo?

Just then, a U.S. marshal and his posse burst in.

“Hold on!,” said Marshal Johnson, “You’re all in direct countervention of the U.S. arms embargo! We’re taking you and that aeroplane of yours over to Pike’s Ranch for safe keeping.

“Deputy Hawkins,” the marshal said to a one-legged man leaning nearby, “You’re in charge of these scalawags until I get word from Washington what to do with them.”

“Pas de problem,” said Didier, sidling up to the one-legged deputy, “I have a plan.”

On May 20, 1913, the newspaper headlines screamed “WAR PLANE, CREW AND ONE-LEGGED GUARD KIDNAPPED!”

A contemporary report of the missing aeroplane, crew and apparently ex-deputy.

The Bisbee Daily Citizen reported “that the aeroplane crossed into Mexico yesterday afternoon in daylight, accompanied by a high-powered bomb of the gravity-contact type.”

The careful reader will note Obregon’s speedy promotion, but there’s even better to come.

“He wants us to bring the machine down to Hermosillo,” said Masson, “and give some demonstration flights to help morale, then fly it over to his headquarters near Batamotal.

“It’s no problemo,” said Didier, evidently quick at picking up local lingo, “I’ll fly the Martin down and the others will follow by train.”

“Yes,” said Didier, “the crew with the high-powered bomb of gravity-contact type, and Major Hawkins.” 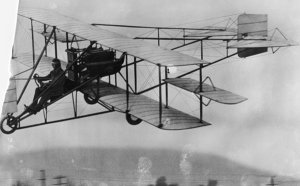 Didier Masson and his Martin pusher..

On May 16, 1913, Masson demonstrated the aeroplane as a morale booster. “Then it’s on to Guaymas and our new careers as mercenaries in service of the Constitutionalists.”

Ruth Reinhold’s book on Arizona in Aviation History gives all the details: Amazingly enough, Didier Masson’s exploits with the crated Martin pusher, the phony kidnap and even one-legged Deputy Reuben Hawkins’ rapid rise in the Mexican Constitutionalists are all true.

On May 28, 1913, Masson targeted its bombs on the Federalist ship Morelos. Though it caused no damage, it certainly scared hell out of everyone and announced a new era of military tactics.

The Sonora, preparing for a mission. Image from Sky Pioneering.

Masson had named his aeroplane the Sonora in honor of the Mexican state in which all this occurred. The Sonora dropped bombs and propaganda leaflets, the latter, likely with more effect. It was also used for reconnaissance duties. Masson kept this up until August 5, 1913, by which point he quit the Constitutionalists who were a month’s in arrears with his pay.

But the exploits of the Sonora continued. On April 15, 1914, now piloted by Gustavo Salinas, it actually hit and damaged the Federalist ship Guerrero at Topolobampa. Alas, 17 days later, the scrappy Martin pusher was “washed out,” as they said in those days (i.e., damaged beyond repair), at Mazatlan.

General Alvaro Obregon went on to become President of the new Mexican government, 1920-1924. Didier Masson had a rich career in aviation—in Hawaii, Canada, the U.S., France and eventually back in Mexico—until his death there in 1950. It’s not disclosed what happened to Colonel Reuben Hawkins. ds