IS ANYONE OUT THERE??

THERE ARE billions and billions of stars in the universe. Some of these stars likely have planets orbiting them. Some of these orbiting planets likely lie in what’s come to be called “the Goldilocks Zone,” with conditions promoting life. And, given the age of the universe, some of these life forms are likely to be more advanced than we are.

If so, why haven’t they communicated?

This is the Fermi Paradox, first posed by physicist Enrico Fermi.

I offer here some thoughts on the Fermi Paradox, together with citing an attempt to initiate communication from our planet to another.

First, the Paradox itself may be on shaky ground. Suppose I take the argument one step further: With the billions and billions of possibilities, it’s a virtual certainty that somewhere out there lies a really great northern Italian restaurant.

Second, granted the existence of life forms that are superior to ours—somehow, this isn’t hard to imagine—why would they bother communicating?

Their first awareness of us likely came from 1950s television, and the medium hasn’t improved all that much since then. (“Zork, come look at this. You won’t believe how this earthling dances!”)

Okay, let’s grant that they’re also inquisitive sorts. But why would these visitors from the past/future actually want to communicate? Isn’t this a bit of ego on our part? Does a zoologist studying kangaroos seek out a smart one?

Enough of them wanting to chat us up. What about us initiating the communication?

Bingo. By the luck of the draw, the off-terrestrials just happened to share our Base 10. Maybe they have two fergles on each of their five hundets.

In real life, binary format is a better bet, as 0 and 1 have a natural off/on analogy in digital computers. On the other hand, if the other-worldlies are into quantum computing (see www.wp.me/p2ETap-Wn), we’d better hope they have a good memory of their old digital days.

An excellent means of sending or receiving a message is the Arecibo Radio Telescope in Arecibo, Puerto Rico. Located 48 miles west of San Juan in karst (topography characterized by caves and sinkholes), Arecibo’s main curved focusing disc is the largest on Earth.

By the way, the Karl G. Jansky Very Large Array (VLA), west of Socorro, New Mexico, is considerably larger. But, as its name suggests, it’s not a single unit. Also, it’s purely an observatory, dedicated to receiving, not sending. 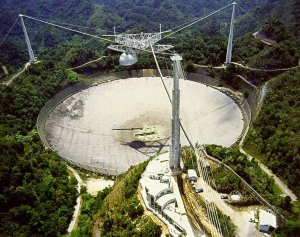 The Arecibo Radio Telescope. Note the buildings and vehicles located toward the bottom of the photo.

Arecibo was built 1960-1963 and remodeled in 1974. To celebrate the refurbishing, an Arecibo Message was broadcast a single time into space through frequency-modulated radio waves. The message consisted of 1679 binary units, or bits, the totality of which form a graphical image (if suitably interpreted).

The Arecibo Message, with color added to highlight its separate parts. Black = 0; white and other colors = 1. Image by Arne Nordmann.

Below these are the atomic numbers, left to right respectively, of the elements hydrogen, carbon, nitrogen, oxygen and phosphorus. These particular elements are chosen because they form deoxyribonucleic acid, DNA.

Other key formulae are followed by a stick man and human data, the solar system and, last, the Arecibo Radio Telescope and its characteristics. For a full description, see http://goo.gl/42qj.

2 comments on “IS ANYONE OUT THERE??”

This entry was posted on April 28, 2013 by simanaitissays in Sci-Tech and tagged Arecibo Radio Telescope, Fermi Paradox, northern Italian restaurant.