LET US celebrate the memory of Sergio Pininfarina, who died earlier this year at age 85, with one of the less familiar cars of his Italian design house, the 1995 Honda Argento Vivo.

This car may not be as well known as other Pininfarina designs conceived under his leadership. However, originating as a concept car for the 1995 Tokyo Motor Show, the Argento Vivo—and its unexpected siblings—certainly got to live the high life.

The Argento Vivo’s hood and rear deck were of polished aluminum, the rest of its bodywork of glass fiber finished in dark blue.

First, a bit of Pininfarina history. Sergio’s father Battista Farina acquired the nickname “Pinin” as his family’s youngest son. He gave the name Pinin Farina to his carrozzeria established in 1930, the name of the coachwork firm eventually evolving into Pininfarina. In fact, in 1961 Battista had his surname officially changed to this as well.

By the way, in 1950 Battista’s nephew, Giuseppe “Nino” Farina, was the first world champion of the modern Formula 1 World Drivers Championship.

Like his father, Sergio became a world-renowned automotive stylist. Under his leadership, Pininfarina designs included the Ferrari Testarossa, F40, Enzo and 458 Italia, the Fiat 124 Sport Spider and the Cadillac Allante.

Pininfarina’s space frame of aluminum extrusions was quite advanced technology in 1995.

The Argento Vivo had a space frame of extruded aluminum channels. Its bodywork was fabricated of polished aluminum atop glass fiber panels rendered in a contrasting dark blue. A retractable hardtop disappeared into a niche between the passenger compartment and trunk. 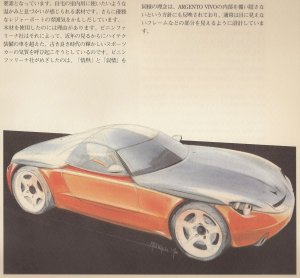 The artful press kit is in Japanese and English, with supplements in Italian, French and German.

Details of these features are given in one of the most artful press kits imaginable.  It’s printed on heavy art paper with beautiful design sketches and full specifications. It even contains what’s purported to be a two-page cut-out model. (I’ve not wanted to destroy the kit to verify this.)

The Tokyo Motor Show’s Argento Vivo had a Honda 2.5-liter 20-valve 5-cylinder powerplant producing 190 hp. But not for long. 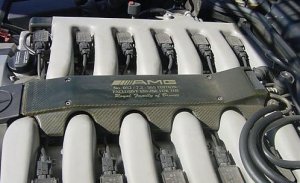 The Sultan of Brunei’s idea of Argento Vivo power: an AMG 7.3-liter V-12. Image from Benzworld.org.

The Sultan of Brunei, a car enthusiast of legendary proportion, persuaded Pininfarina to create a fleet of five Argento Vivos. In place of Honda hardware, though, in went Mercedes-Benz suspension, brakes and transmission. Last—and amazingly—power for each of the cars came from an AMG-prepped 7.3-liter 525-hp V-12.

The Argento Vivo had little influence on future Hondas. The company’s similar-size S2000 was already in planning stages. However, the Argento Vivo made more than a footnote in automotive history: It even has its own Facebook page, http://tinyurl.com/8zzaff5.

Let’s stop by and let them know that we hold the Pininfarina née Honda Argento Vivo in high regard.

Pininfarina composed a timeless design in the Argento Vivo.

We’ll evidently be in good company, as regard rarely gets higher than that of a sultan. ds

This entry was posted on September 18, 2012 by simanaitissays in Classic Bits and tagged Honda Argento Vivo, Sergio Pininfarina, Sultan of Brunei.